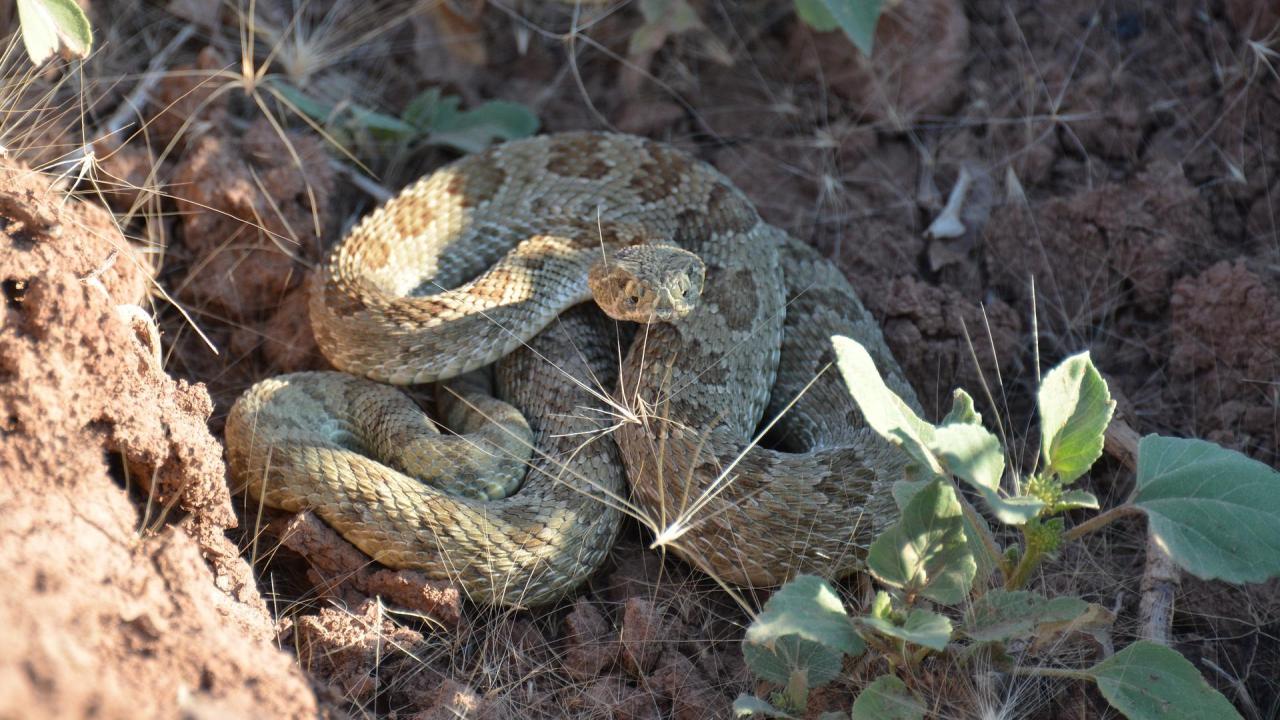 **Venomous snake bites are veterinary emergencies. If you suspect that your pet has been bitten by a venomous snake, seek veterinary assistance immediately.**

Pit vipers, a group of venomous snakes that includes rattlesnakes, copperheads, and cottonmouth

water moccasins, are responsible for almost all venomous snakebites in the United States. Identifiable characteristics of these snakes include retractable fangs, heat-sensing “pits” below the eyes, and elliptical-shaped pupils. Most rattlesnakes also possess the distinguishing rattles on the ends of their tails. Rattlesnakes are responsible for most snakebite fatalities in the U.S. Nine species of rattlesnake are found across California, with the Western Rattlesnake (Crotalus oreganus) being the most widespread.

Not all snakebites are created equal. The amount of venom that the snake injects when it bites depends on a number of factors, such as the species and size of the snake, the number of times it strikes, the depth of the bite(s), and how long it has been since the snake’s last strike. Snakes are more active in warmer months, so increased pet interactions typically occur in April through October.

Sometimes snakes bite without injecting any venom (“dry bites”). However, in cases of envenomation, the pet requires immediate veterinary assistance.

Clinical signs of a snakebite can differ depending on whether the injected venom primarily contains hematotoxin or neurotoxin, which varies by species. Western Rattlesnakes have potent hematotoxins, which can induce bleeding (hemorrhage). Local damage from hematotoxins, in the form of discolored tissue, can appear quickly, spreading from the bite site. Blood may appear from the wound, and may not clot properly due to anticoagulant properties of the venom. Localized swelling can occur, which can compromise breathing if the bite occurred on the head or neck. If neurotoxic venom was injected, muscle twitching, paralysis, and other neurologic signs may be observed. Secondary infections can occur at the wound site, but are extremely rare.

The presence of fang marks only indicates that a bite occurred, not that venom was injected. Localized clinical signs are used to assess the severity of the bite, the likelihood of envenomation, and whether antivenin is needed (and if so, how much should be given). However, they do not indicate whether more systemic complications have occurred.

Cats are brought to veterinary clinics and hospitals for snake bites less often than dogs. This is likely because cats are usually outside without supervision, so owners and caretakers are less likely to witness snakebites when they occur. Cats are also more likely than dogs to hide after an injury, which can result in delayed treatment. Although cats are more resistant to venom on a milligram of venom to kilogram of body mass basis than dogs, they also have smaller body sizes. As a result of all of these factors, cats that have been bitten by venomous snakes may present to veterinary clinics in a more serious condition.

Bite locations also tend to differ between dogs and cats. Cats are more likely to bat at snakes with their front paws, so snakebites more commonly occur on a front limb, whereas dogs are more likely to sniff the snake, and consequently are often bitten on the face or head.

If you think a venomous snake bit your pet, try to keep them quiet, limit activity, keep the bite site below heart level if possible, and seek immediate veterinary assistance. Do not attempt to treat your pet with tourniquets, hot or cold packs, suction, incisions, or other measures as these approaches are ineffective and can delay treatment.  Urgent, intensive treatment is required to limit long-term effects of the venom.

Since there is a lack of studies on snake bites in cats, treatment recommendations are currently based on established guidelines for people and dogs. This may include administration of antivenin and supportive care (IV fluids and pain management).  Cats tend to have more allergic reactions to antivenins, but this can vary depending on the different formulations. Antimicrobials may be needed when there is evidence of wound infection. The use of corticosteroids and antihistamines is controversial, but they have been used with some success to treat severe allergic reactions (anaphylaxis).

Red Rock Biologics produces vaccines against Western Diamondback Rattlesnake toxoid for dogs and horses. While the vaccines do not offer immunity to snake bites, they may help decrease severe effects until veterinary treatment can be initiated. The safety and efficacy of the vaccines are currently unproven. There is no rattlesnake vaccine labeled for use in cats.